I chose this pattern to sew for my intermediate sewing class at The Finishing School. My instructor told us (one other gal in the class) to choose a pattern that we could make over and over slightly varying the pattern each time we make it. I thought that I could make the shirt and skirt over and over again but the dress was probably a one time thing just because you can't really make the same dress twice, now can you? Anyway, the last three to four weeks of the class I made this shirt includinig a muslin. I'm really sad that I didn't take a picture of the pinned and final muslin but I would have looked like a total nerd in the class. One draw back about the class is that I didn't have time to take notes! We made a lot of sample items and for a bunch of them I wish I had a step by step example (e.g., lapped zipper). I only sewed this shirt in class so it took me three to four weeks to finish it from muslin to final garment which I guess isn't that bad and probably came to 6-8 hours from start to finish. Terence calls this shirt a "monumental success" and I think he finally thinks that the class was worth it. 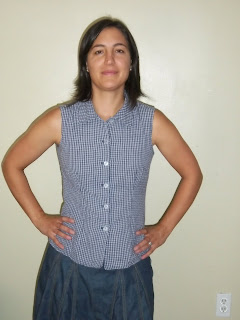 I've been waiting to make other garments until after the class becuase of the fitting exercise. It was a whirlwind and the instructor did it all so it may will take some time for me to master all by myself. Muslins are now a must for every new pattern until I get to know the usual suspects for my body. It will be hard doing it do myself which is why a dress form is pretty handy. I guess I'll have to add it to my Christmas/birthday wish list. 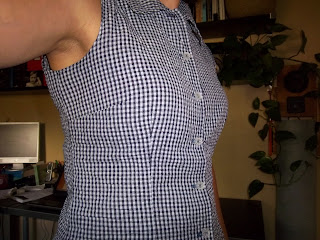 I learned to: make and alter a muslin; use the muslin as the master pattern for the final piece; alter, sew and apply a colar, alter and sew darts, adjust the facing at the colar; and place and sew buttonholes and buttons. You may not think some of these things are huge but they all add up and can make something look "homecky becky" or professional. I think that this shirt looks pretty professional when compared to the Frumpy Shirt I made a while ago. Don't think I'll be wearing that thing again and if do it will be under a sweater or cardigan like I wore it the first time! 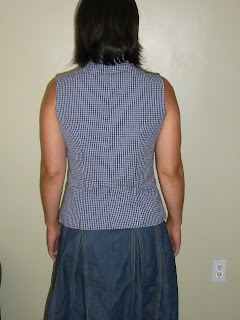