As you know I signed up for the above mentioned swap.  The swap was round-robin style:  the person who I had wasn't the person who had me.  About a week after the packages were supposed to be sent I wrote a calm and collected (read: worried) email to the swap organizer, Kat from Modern Vintage Cupcakes, who graciously replied with the following:


"Your swap package has quite a distance to travel, so I suspect it'll take a couple of weeks to arrive with you! The person who it's coming from it very reliable though, so never fear - I'm sure it'll get to you safe and sound. :-)"

(read:  calm down girlie, you'll get your package - what, is this your first swap or something?)

So of course, I immediately start thinking of the places it could be coming from and the only person that popped into my head was Adey from The Sew Convert who lives in Singapore.  Adey was one of the five talented women who sewed a garment a week for The Sew Weekly in 2011.  ANWAY.  I was beside myself fantasizing about what I was going to be getting, who it was going to be coming from, what I would make, would it be good enough, would I have time, and on and on and on.

Nothing.  Nothing came and I really started to worry.  Was my swap partner lame?  Did they forget about me?  You know, all of the really dumb things you start to think when you are new to something and don't know what to expect.  How naive of me!  How utterly STUPID of me.

So I kind of forgot about the whole thing until one night my husband casually told me that I received a package from Australia.  AUSTRALIA!  Um.  Australia?  Australia, as in, where VERONICA DARLING is from?  As in, Toni calm down, you might be touching something that Veronica Darling touched?  (OK, really - I'm not this crazy or stalker-y).  So I picked up the package and saw this: 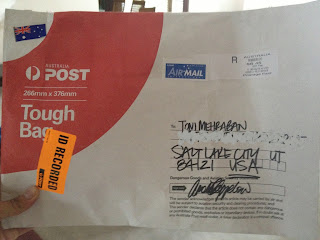 Then I turned it over and saw this: 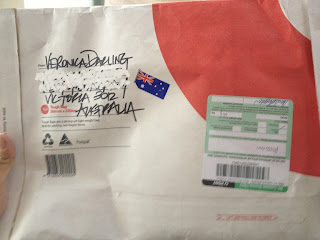 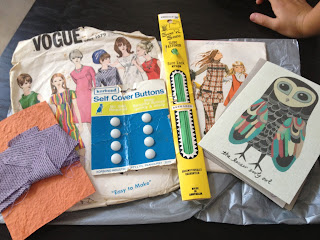 I am one spoiled gal, fo sho!  Veronica (yes VERONICA!) sent along homemade bias tape, self cover buttons, an emerald zip, a Vogue pattern for me, AND a very thoughtful pattern for my daughter, Roya.  Look how happy she is to be included: 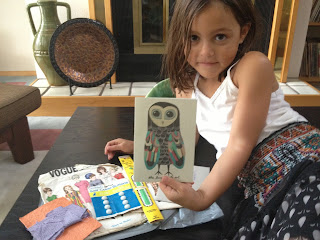 Roya is holding a beautiful card from a local artist that Veronica wrote a cute little note inside.  Thank you so much to Veronica for the lovely goodies.  It was well worth the wait and I am so excited to started sewing!  And now I am so addicted to swaps.  How could you not be when your first was so awesome?  I know each and every one will be as exciting as this one was.  How could it not?
Posted by THM at 1:34 PM
Labels: Notions, Patterns, Sew Weekly, Swap

What a great package with vintage notions! I am addicted to swaps as well and this one was my second!

Darling Toni, just only read your post, you are SUCH a sweetie and how gorgeous is Roya!?

I'm so happy you love it all so much, I was nervous because I didn't have much time to get it together... but yay! xoxoxo